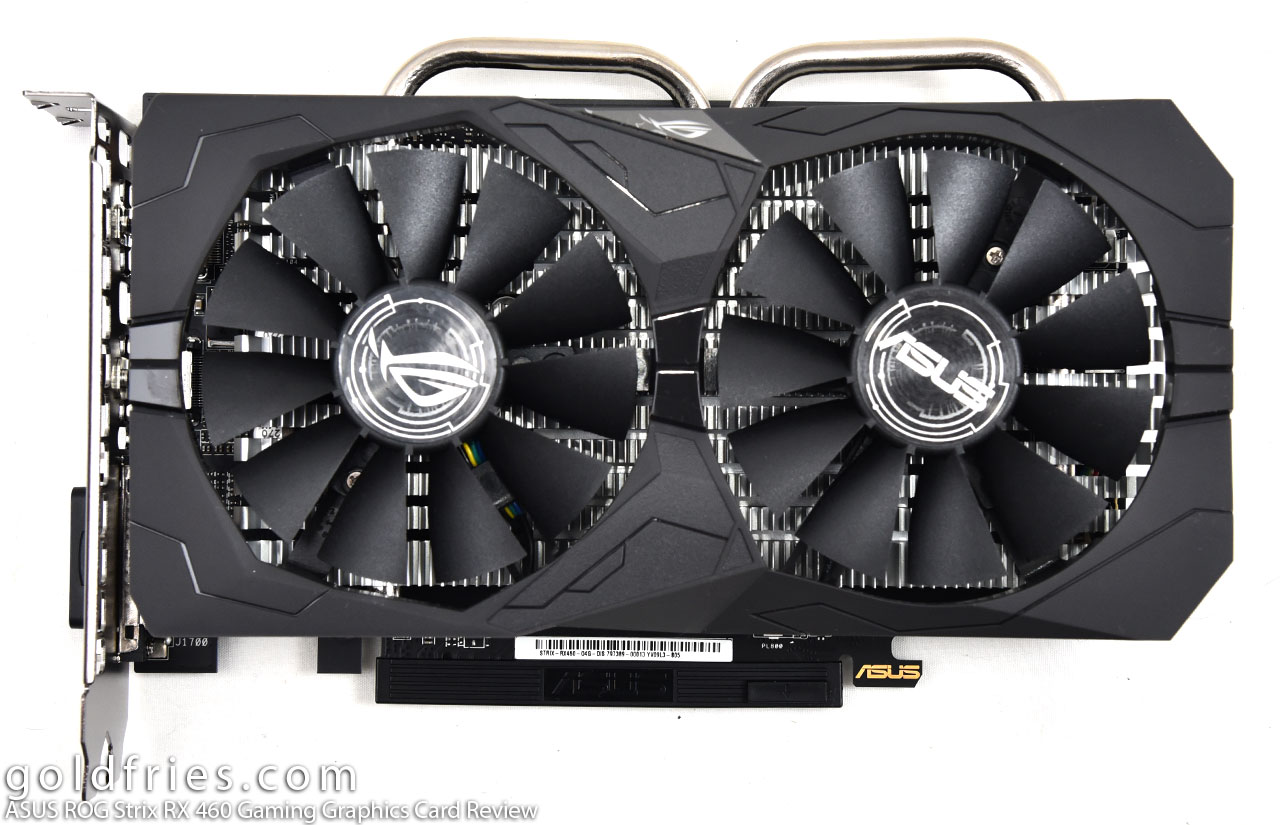 Now before I begin, let’s have a look at the card itself – the ROG Strix RX 460, normally I wouldn’t expect something this impressive for a sub RM 1,000 graphics card.

ASUS’ signature DirectCU II cooling, 0db fan system, RGB lighting on the heatshink shroud – so many goodies on one package which is a lovely touch.

The RGB light is found only on the ROG logo that’s in between the fans, hardly worth mentionting. In fact I’d rather ASUS place a silver logo sticker and do-away with the RGB lighting and have the card retail at lower price.

Here’s the view of the I/O panel and under-side of the ROG Strix RX 460. The downside? There’s no backplate, I do wish they did have one because it’ll make the card sexier. 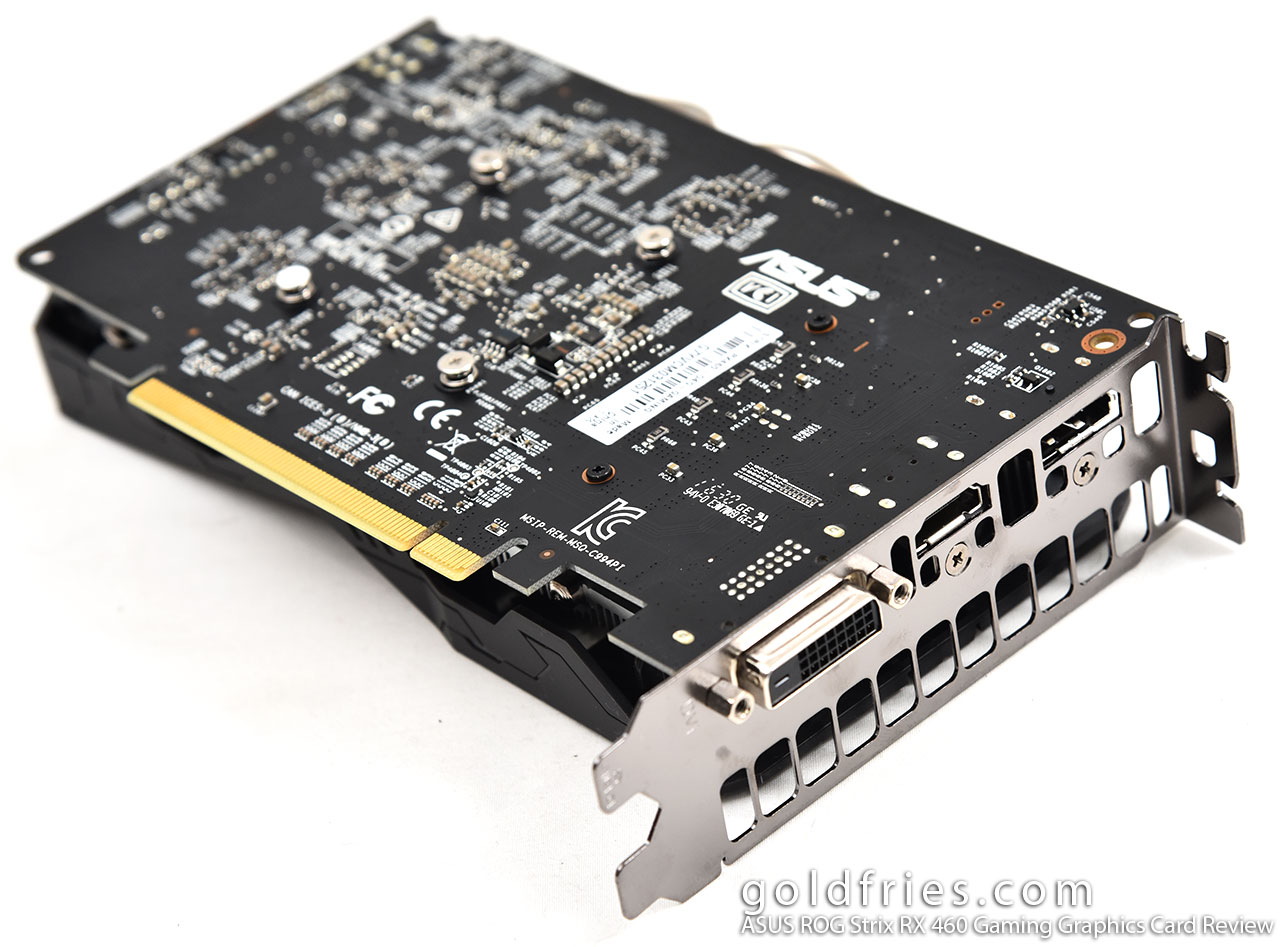 And before we head on to the numbers, here’s the GPU-Z of the card. 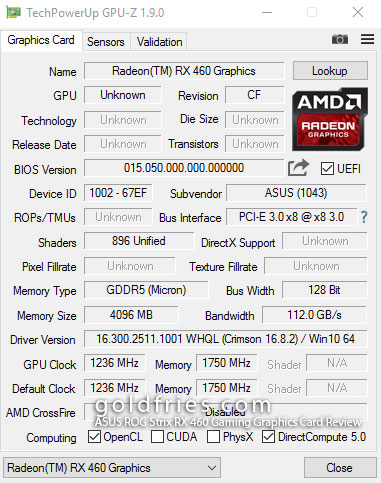 ASUS’ GPU Tweak software allows overclocking, though I must say it’s far from being the best when it comes to overclocking. The interface is sluggish and not good to interact with but nevertheless it gets the job done.

As for the overclocking, the software by default comes with profile up to 4% overclock. I did a 5% overclock myself and the result was disappointing, with just a single frame gain on Unigine Heaven 4.0 which to me is a signal to STOP THERE, there’s really no reason to overclock it any much further.

OK so based on the benchmarks, it’s obvious where the RX 460 is heading. The only time it doesn’t land in the last spot when compared to the 2 flavors of GTX 950 from the green camp, is when the game demands more VRAM.

Sure, the RX 460 comes with features like Eyefinity, PCIe gen 3 compatibility, HDMI 2.0b, DisplayPort 1.4 with HDR support and so on but fact remains that it’s just R7 370 performance. I was predicting it to have R9 380 performance based on the great performance on RX 480 but unfortunately this is not the case.

Unlike my usual test using the MAX / AUTO fan settings, the Strix RX 460 runs so cooling that I decided to test the software instead. At SILENT mode the reading is cooler on load, I believe this is simply due to the lower clock speed compared to OC mode.

The beautiful part about the ASUS ROG Strix RX 460 is that the cooling system is silent all the way even when the card is on load.

The stress was done with Furmark Burn-in Test. Power consumption reading was taken from the watt-meter, actual power draw by the entire system from the wall point. I’m using an Cooler Master V850 with around 90% efficiency and the estimated system power draw (CPU, not including GPU) during Furmark test is 70w.

The ASUS Strix RX 460 isn’t impressive in this aspect, with power draw estimated to be at 120W on load while not delivering stellar performance.

The ASUS ROG Strix RX 460 Gaming Graphics Card retails at about RM 890, which is quite a whopping price for a card with R7 370 performance. What’s interesting to note is that ASUS’ R7 370 retails at around RM 900 so that makes the RX 460 a better value card because you get all the new features found on the Polaris system by AMD.

Interestingly the card that challenges the RX 460 are the GTX 950 cards, of which even the ASUS GTX 950 (non-PCI-E power) that retails at about RM 800 still outpaces it.

Now about the price again, RX 460 of other brands retail at around RM 600 which is around 66% the price of the ASUS model here, so whether it’s justified to pay additional 50% to get similar performance (4GB vs 2GB).

In the end, the ASUS ROG Strix RX 460 is a great effort, one that kills off their own R7 370 by providing better features from the new architecture, great cooling and even RGB lighting where appreciation is subjective.